The article deals with Arabic graphic multilingual works published in Dagestan in local languages by the lithographic method at early 20th century. The translated publications were used widely: textbooks on Arabic Grammar with comments and explanations in Dagestan languages, brief surveys on the basics of Islam, collections of poems, multilingual dictionaries-phrasebooks (the idea of publishing of the last ones was adopted from the Middle East countries, as well as the Volga region).

Dagestan scientists and educators of the early 20th century took an active part in the creation of translated literature, which was reprinted repeatedly in local printing houses. Multilingual Arabic graphic printed editions have played an important role in the cultural life of the Dagestan peoples.

It is a well-known fact that in multi-ethnic Dagestan, Arabic was the language of worship, science, literature, record keeping, private and official correspondence until the 2nd quarter of the 20th century. The widely different works of the substantial scientific value, created by Dagestan people in Arabic, had been saved until nowadays.

From the 18th century [1], the peoples of Dagestan also created works in local languages using the Arabic script - "Ajam".

At the early 20th century, the process of formation and development of local printing took place. At that time, there were 10 printing houses in the Dagestan Oblast. However, only 3 of them published books by using Arabic graphics: in “Caspiy” Printing House of A.M. Mikhailov (Port-Petrovsk); in "al-Matba'a al-Islamiya" Printing House of. M. Mavraev (Temir-Khan-Shura); in I. Nakhibashev’s Printing House (Hasavyurt) [9, P. 126].

The translated editions with the main part of text in Arabic were very popular. The textbooks on Arabic grammar with comments and explanations in Dagestan languages, brief surveys on the basics of Islam, collections of poems and multilingual dictionaries with elements of phrasebooks compiled thematically were among them. Some of these printed books are stored in the Fund of Oriental Manuscripts of Institute of History, Archaeology and Ethnography of the Dagestan Federal Research Centre of Russian Academy of Sciences.

The attempts to adapt the Arabic alphabet to the needs of local languages were made much earlier, from the 15-16th centuries, but the Ajam script has been widely used since the second half of the 18th century [1].

The works of Russian and Dagestan orientalists and literary critics, who studied the texts of Arabic and Ajam works of Daghestan authors in state, private and mosque collections of Arab graphic manuscripts on the territory of the Republic of Dagestan at various times, became the theoretical basis of the research.

The practical significance of the article lies in the fact that the material given in it can be used in researches of linguistic, source-based, historical and ethnographic nature.

One of the first printed books in Arabic, compiled in summary form and combined brief extracts from works of the famous medieval authors of Dagestan and the Middle East on Theology and Grammar ("Muhtasar"  of Ali al-Ghazi-Gumuki, "al-‘Izzy fi-t-tasrif" of Ibrahim b. Abdalwahhab al-Zanjani, "‘Avamil mi’at" of ‘Abdalkadir b. ‘Abdarrahman al-Djurjani) together with explanations of them in Avar and Kumyk, and later in Chechen, became "Muhtasar fi Bayan al-Iman va-l-Islam va-s-Sunnah". This composition had been published by the Dagestan printing pioneer M. Mavraev in Simferopol (the “Printing House of V. I. Yakubovich”, 1905), according to the permission of the censorship of St. Petersburg [1]. 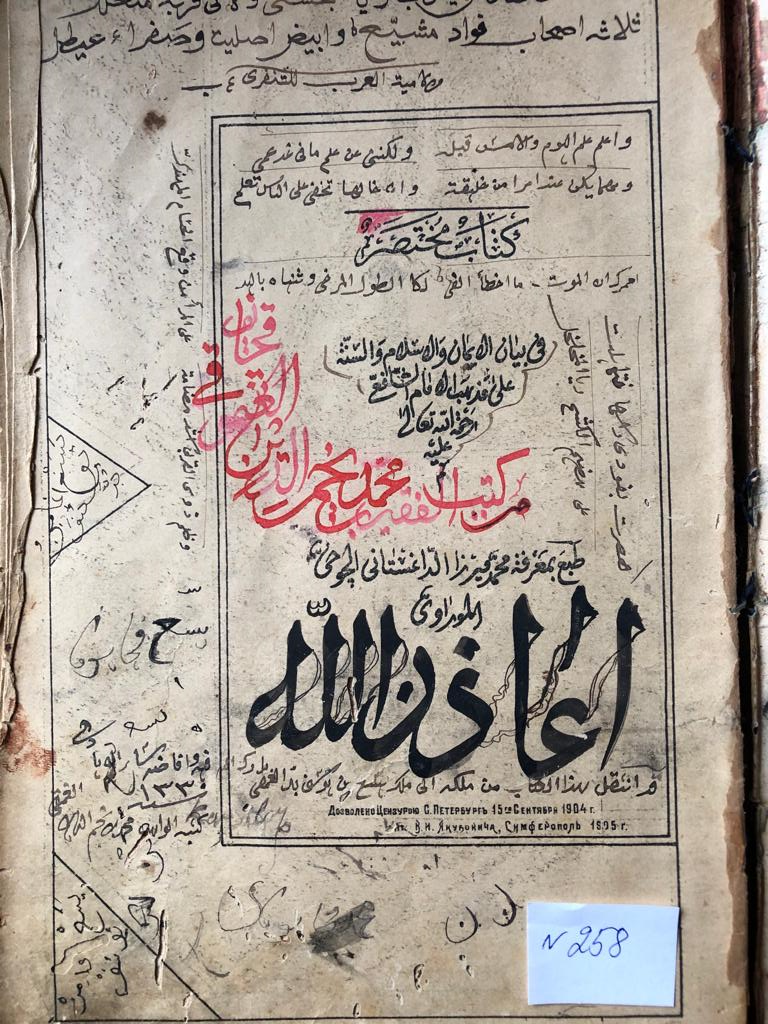 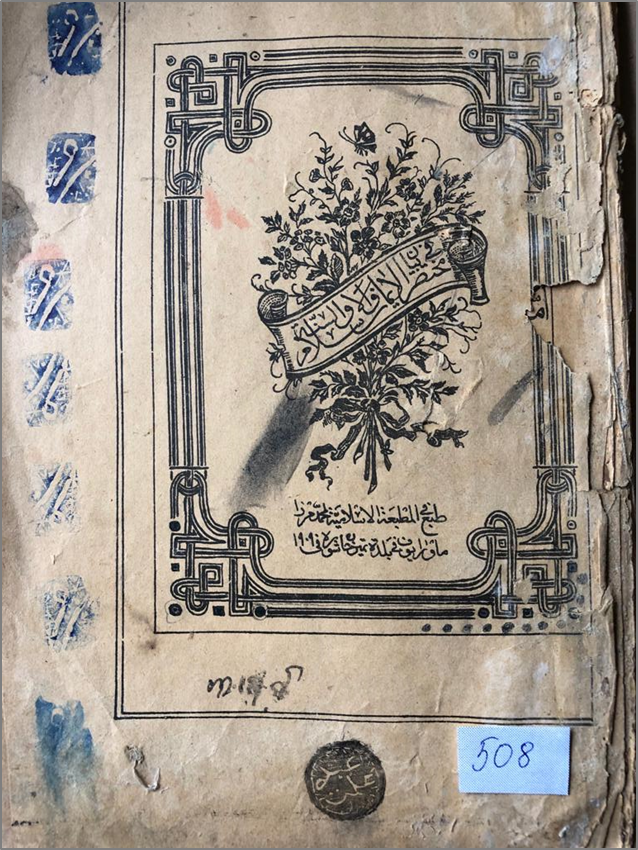 Pages 1-73 of “Muhtasar fi Bayan al-Iman va-l-Islam va-s-Sunnah” contain additional notes made by Muhammad-Ali of Chokh:  the comments on the text in Avar and Kumyk, as well as examples of verb conjugation in Arabic, Avar, Kumyk and Chechen [6, P. 33-39].

It is interesting that the title page of one exemplar of  "Mukhtasar...", stored in the Fund of Oriental Manuscripts of the IHAE DFRC RAS, has the owner's inscription.: "from the books of Muhammad, the son of Nadjmaddin al-Gumuki Kachayuf (Kachayev)" [1], indicating that the book entered the FOM from Kumukh (it was the territory where the Laks live compactly, speaking, respectively, the Laks language).

No less popular in Dagestan became the textbook “Madjmu‘ at-tasrif” on the Grammar of the Arabic language, where samples of verb conjugation (the Arabic verb نصر) in the Kumyk and Avar languages are given as additional material form [1].

The book had been published 8 times in Temir-Khan-Shura, Port-Petrovsk and Khasavyurt in 1911, 1912, 1913 and 1915. The initial four editions of “Majmu‘ at-tasrif" had been copied for lithographic printing by Ghazi-Muhammad, a son of Muhammad-Ali from Urib village, one of the most well-known copyists of Dagestan.

A special place among Arabic-language multilingual books is occupied by pocket-type dictionaries compiled by the outstanding Dagestan educator, poet and translator Abusufyan Akayev (1872-1931) [1, P. 26-42]. Between 1908 and 1928, he prepared and published for the first time four -, five -, six - and seven-language translated dictionaries in the North Caucasus, considering the extraordinary poly ethnicity of the region [9, P. 80-86].

The first of the dictionaries was published the four-language "Sullam al-lisan" ("Ladder of language") in Temir-Khan-Shura, in the Printing House "al-Matba'a al-Islamiya" in 1908. The 64-pages book had an easy-to-use format of 9 x 14 cm (see Fig. 3). 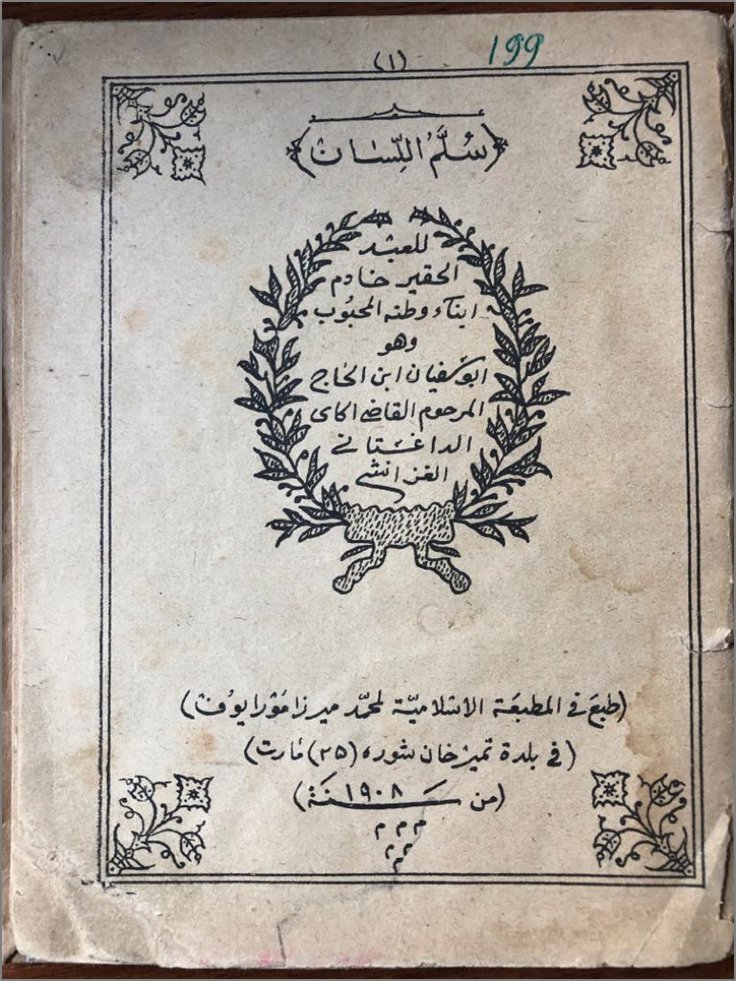 In the Preface, written in Arabic, the author (Abusufyan Akayev) writes: "there are many languages in Dagestan that differ from each other. The most important of them are about 10, such plenty is absent in any place on Earth. This is both good and bad, but the damage from such multilingualism is much greater than the benefit. The diversity of languages was the reason that Arabic was used in correspondence, documents, and registration books of the qadi’s, although peoples of other lands, such as Bukhara, Crimea, Kazan, and Istanbul, use their own Ajam script for these purposes. The same would be in Dagestan, if not the difference in languages. The damage caused by multilingualism consists that it serves as a barrier to the interethnic consent of Dagestan peoples, as well as hinders the dissemination of science and knowledge. If you look closely at the issue, you can find other aspects of the harm of multilingualism. To remove this obstacle, I composed a book and called it "Sullam al-lisan" ("Ladder of languages"), and when the need for Russian appeared, I added Russian words.

The external parameters of the dictionary were described by the famous Dagestan researcher of the old printed books in national languages A.A. Isaev: "The dictionary is compiled according to the grammatical-thematic principle: it consists of 20 sections in which the lexical material is arranged by parts of speech and grammatical forms, as well as by sockets connected by the unity of the topic" [5, P. 132-133].

Verbs are submitted in infinitive, past and future tenses, singular and plural, 1, 2 and 3 persons. There are also participles, pronouns in various forms, numerals, particles, nouns that are grouped according to certain topics: these are the names of natural phenomena, seasons, celestial bodies, abstract phenomena, household items, plants, animals, clothing, weapons, days of the week, social and relationship terms [8, P. 80].

The final chapters of this lexicographic work are a simple phrasebook: from page 52 to page 62, the dictionary contains phrasal material (commonly used questions and answers to them) (see Fig. 4). 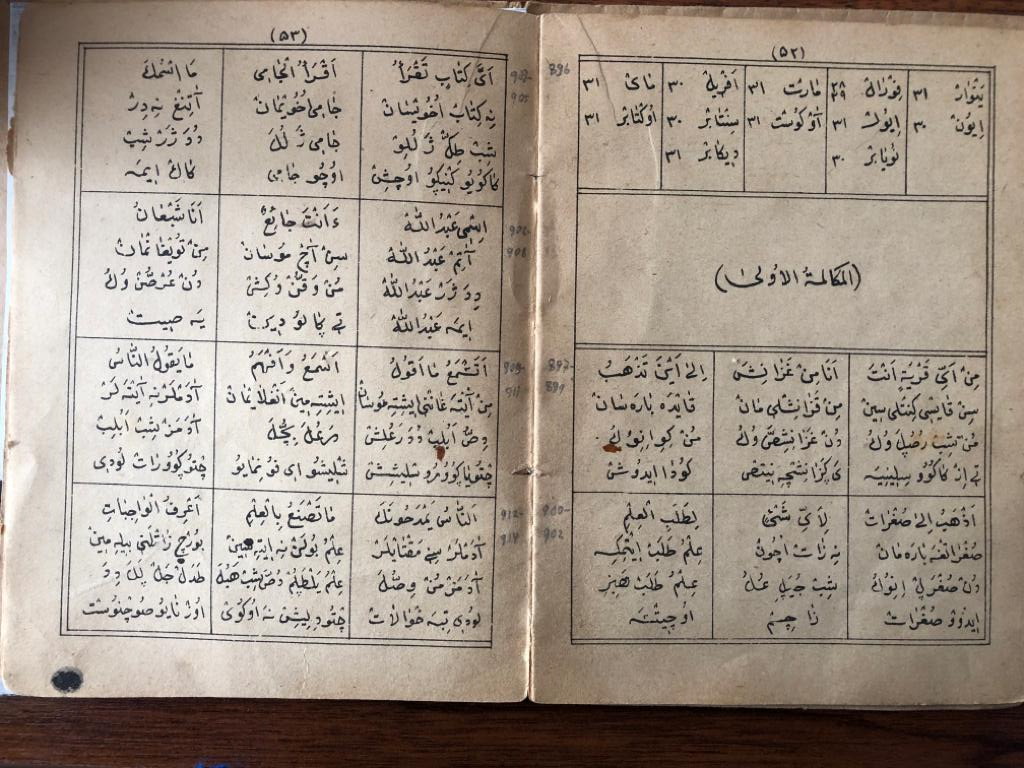 The choice of these four languages by Abusufyan Akayev was not accidental: at the early 20th century, these languages were the most widespread in Dagestan. Arabic, as mentioned above, was the language of the Muslim religion, science, and culture. Avar was the language of interethnic communication of Avar-Andi-Tsez native speakers; Kumyk was the “lingua Franca” of the plain peoples of the North-Eastern Caucasus. As for the Russian language, the need for its study and use was specified in the Preface by the author.

In 1915, the four-language dictionary "Sullam al-lisan" was re-issued. The new edition has added 160 words, included the Russian and Arabic alphabets, and figures from 1 to 100 are represented by Arabic and Indian numerals [8, P. 82]. 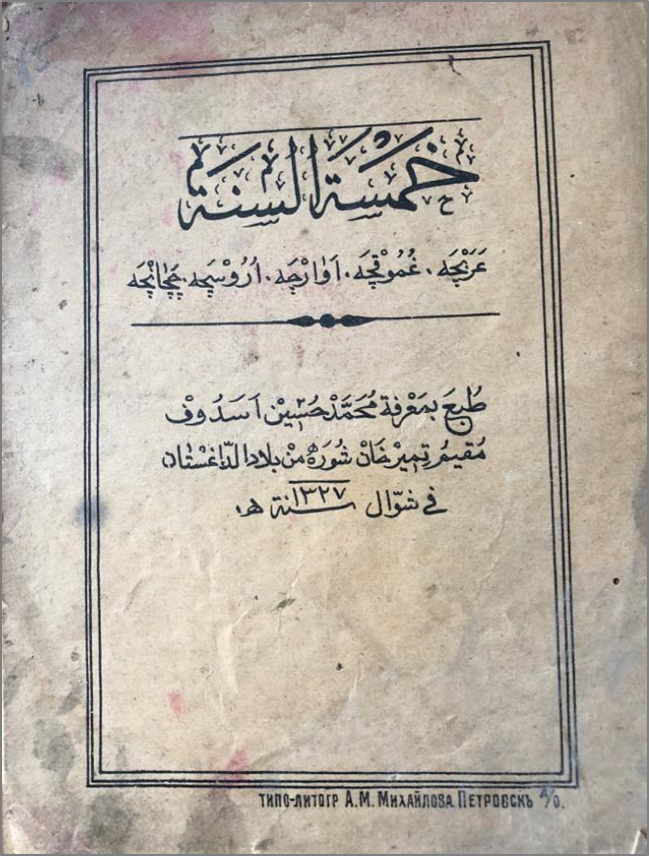 The six-language version of A. Akaev's dictionary, “Sittat alsina”, was published once, in the Islamic typo-lithography of M. Mavraev (1911). In this version, there was also Lak language ("Ghazikumukcha"), in addition to Arabic, Kumyk, Avar, Russian and Chechen languages. Totally, the book contains 1300 words and phrases.

The seven-language dictionary "Sab‘at Alsina" was the last one published in Buinaksk (previously Temir-Khan-Shura) in 1928, after the establishment of the Soviet Power. It included words and phrases from Arabic, Kumyk, Avar, Russian, Chechen, Lak, and Dargin (Dargin became the new included language).

After 1928, persecution and repression against Muslim scientists, representatives of the spiritual elite of the region, began in Dagestan.  Militant atheists under the slogan «Fight against obscurantism» exterminated a large number of manuscripts and old printed books in Arabic and Ajam. Accordingly, publication of Arabic graphic books was ceased.

Ismail-bey Gasprinsky was the famous Tatar educator and the founder of the “Jadidism” Movement in Islam [1].

Multilingual compositions and dictionaries were very popular in Dagestan and Chechnya, especially the five-language dictionary, which was reprinted several times. The edition of multilingual Arabic-language books, according to their authors, helped to eliminate obstacles to communication and dissemination of knowledge. Many Dagestan scientists, in addition to Arabic, spoke several local languages, and knowledge of the language of their neighbors was welcomed both in everyday life and academic community.

The publication of multilingual dictionaries was also practiced in the Middle East, as well as in the Volga Region, from where, according to Dagestan turkologist G. Orazaev’s conclusion, Abusufyan Akaev borrowed this idea and successfully realized it in the North Caucasus. For example, the Tatar theologian and public figure Galimjan al-Barudi (Galeev) (1857-1921) published in Kazan (1893) a trilingual Arabic-Persian-Turkic dictionary "Lugat salasa" on 41 pages [7].

A comprehensive study of multilingual old printed books will allow us to get a clear picture of the outlook and scientific knowledge of the Dagestan peoples, to estimate the level of their international communication in the late 19th – early 20th century.  The tradition of creating multilingual dictionaries has also found its expression in a large number of modern publications – dictionaries, phrasebooks, scientific literature - the purpose of which also remains the same: to facilitate the communication of peoples speaking different languages in the multinational Russian Federation.