Morphological productivity is described as the characteristics of word-formation processes whereby new adjectives are created to satisfy a naming need. In this article, we first lay out the process of coining new words and analyze how virtuously compound adjectives are created in mass media text. The names are structured in groups taking into account derivational models, their reasons and functions in media professionals’ speech. This paper asserts the significant role of word formation in the development of the English language.
Keywords:
productive derivational models, compound adjectives, mass media texts.

Among different approaches which have been adopted when investigating creativity, three particular approaches relevant to the present study are the linguistic, the product and the process approach. Creativity in the linguistic approach is manifested through language play and can occur at the formal and semantic levels [1]. Creativity in the product approach is the “ability to come up with new ideas that are surprising yet intelligible, and also valuable in some way” [2, P. 95]. Creative products, as many researchers have identified, sometimes manifest novelty, appropriateness, usefulness, social acceptance, transformation, surprise and problem solving [3]. Alternatively, creativity in the process approach involves several types of thinking such as ‘combinational, exploratory and transformational thinking’ [2]. The term ‘language creativity’, in the present study, is defined as the playful use of language to construct new meanings, transforming current linguistic words structure and involving different types of creative thinking. Moreover, emergent perspectives of language and language development appear to explain how creative language use can enable learners’ language to grow in complexity, giving rise to processes required for the emergence of complex language [4].

Experimental study has focused on such a category of part of speech as adjectives, which “cannot be described mechanically. It is important to understand that these words can demonstrate a wide variety of subtle shades of meaning” [5, P. 77]. In a first broad overview, the coining of new words is conventional and not metaphorically very vivid but we take into consideration that a word is not only the product of some potent rule, it is the inspiration for a whole genre of wordplay.

The article investigates the interplay between various parts of speech in coining compound adjectives as well as lexical units with reference to professional terminology. Our concern is to examine how this interplay is treated in the most representative word-formation productivity models. 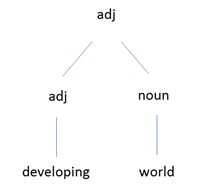 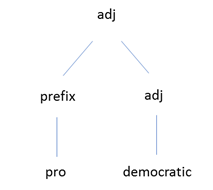 But creativity in a modern language is not so predictable morphologically as it seems and the following patterns illustrate the new word structures: 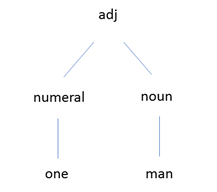 It is evident that a compound adjective nation-brand is built out of a noun nation and a noun brand; the second adjective one-man is united on the basis of a numeral one and a noun man. These illustrated patterns prove that the stereotype is unfair. “The world of words is just as wondrous as the world of syntax, or even more so” [6, P. 127].

Since Berschin, two well-differentiated trends can be distinguished. There are, on the one hand, scholars who understand productivity measurement as a fluctuation of the number of attested words and, on the other, scholars for whom a process is either productive or unproductive [7].

The language of articles from well-respected British news magazine, The Economist, demonstrates financial, political, legal or economic trends: “Mass media texts serve as a source of linguistic and field-oriented professional data…” [8, P. 66]. However, as the search did not cover all newspapers for all years, a statistical analysis is not possible: our data can only be interpreted as representing the range types of uses, not their actual frequencies. This paper examines the ways of coining of new words, as mass media text is at its best when dealing with the language created within articles and corresponding real-world situation.

In mass media texts any affiliation has become a favourite with compounds. As a consequence, these derived uses can be characterized as compound names with reference to national affiliation, where the second element in this structure is reasoned by the use of the initial – an adjective։ Scandinavian-style social democracy Scotland-based businesses, Slavic-speaking nations․

Another subclass of compounds originated either in the speech of politicians or in other media source alludes to political affiliation of any political party or movement: the Christian-Democratic welfare, anti-Soviet leaders, a post-Obama era, an individual politician seems to be too attractive as it allows to constitute a separate compound, in which the family name becomes the object of continuous reinterpretation. To arrive at such an expressive comment reading, readers have to notice the pursuit of uniqueness and notion division.

In the following section, we investigate the regularities of coining new words:

Before we can explicate further the coining of words, we need to account for their relationship to expressivity. On the basis of existing research, a particular feeling or influence for the comprehension of compound name can be formulated as the quality of being expressive. Degree of expressivity is not used through a word materially, but it is included into notion: an adjective based on semantic change of meaning gains stylistic connotation and emotional appeal. Thus, diametrically opposed degrees of expressivity are represented by the initial element of compound names: broad-based groups, large-scale amnesty, high-risk strategy, lower-profile parties, short-term crisis.

A remarkable fact is that all these models are adjective-creating rules, and many of them are productive, give rise to lexemes of a different word-class. Therefore, if a process is regarded as productive when it creates new derivatives steadily, this fact denotes that the process in question contains many low-frequency units which, in turn, automatically means that there is a high probability of finding more low-frequency items (i.e. new compounds) from that process in the future. This is one of the pros of these models because, despite being based on attested data, it is in theory able to predict future productivity rates [7].

This article has studied productive derivational models in mass media texts written by such a specialized subgroup of interpreters as journalists. Of particular interest for us have been examples in which a compound adjective is formulated with emphasis on political geography, international relations, the aspects of economic and political sciences.

As a result, we can note that the language analogy has been continuously in use for several last years. In addition, English is free and easy with "compounding," which glues two words together to form a new one, like law-enforcement and nation-brand. Thanks to these processes, the number of possible words, even in morphologically impoverished English, is immense. Considered examples underline the specificity of the English language, demonstrating compound object as a naming unit.

To sum up, many of compound names refer to multiple formation, which is not hard to repeat and typically combine. Furthermore, derivational model, staying flexible enough to allow for variation as adjectives, creates a unique compound name. These facts prove that the role of word formation in the system of the English language is not only significant but it is intensely active and available for search: word formation continuously increases the number of new naming units in the English language on modern stage of its development.