“THE AUTUMN WILL” BY A. BLOK: ONCE MORE TO THE QUESTION OF IMITATIVE POTENTIAL OF POETIC RHYTHM

This article considers the necessity to rethink the traditional approach to the problem of semantic halo of the poetic metre based on the study of the rhythm of Alexander Blok's poem “The Autumn Will”. Namely, it deals with the necessity to take into account only those texts where the metre, the motives and the syntactic formula coincide and are of rhythmically conditioned nature rather than accidental.
Keywords:
metre, meaning, rhythm, semantic halo.

The problem of “the metre and meaning”, the pioneer of which is K.Taranovsky [4], (although the definition itself was coined in the well-known book by M.Gasparov [3]), has been of great interest to prosody researchers for almost half a century. E. Hvorostyanova dedicated an article to this topic – “Metre and Meaning: Problem and the History of its Study”. In it she states that almost all scientists who addressed this question, regardless of whether they proved organic or historical conditioning of a semantic halo, followed the same methodological pattern: they moved from metre to meaning trying to “discover one or more stable motives in texts with the same metre”[5].

In this paper, we (following Hvorostyanova's example) decided to change the common argumentation; we transferred the research of the problem to the micro-level, i.e. we tried to establish the presence or absence of a connection between a particular lyrical theme and the rhythmic structure of the text. We have chosen Blok's poem “The Autumn Will” as the main object for consideration since it is written in the same poetic tradition using 5 stress foot trochee, which was started by Taranovsky in his research.

Taranovsky dedicated a whole paragraph to Blok's text which emphasizes its importance for the scholar. Here is a relevant quote, “Already in young Blok's poetry (1898-1903) we find a number of poems written in 5 stress foot trochee, which develops or touches upon the topic of the path. You can find rhythmic-syntactic figures with verbs of motion in opening lines, few poems contain them in the first line, e.g. “Табор шел. Вверху сверкали звезды”(1898); “Ты уходишь от земной юдоли” (1901); “Восходя на первые ступени // Я смотрел на линии земли...” (1901); “Инок шел и нес святые знаки // На пути, в желтеющих полях...” (1902); “Возвратилась в полночь. До утра // Подходила к синим окнам зала///” (1903). There are certain links that make us associate Blok's poetry with Lermontov, though they are not always easily traced. However, in “The Autumn Will” (1905) this connection becomes more obvious than ever; it is emphasized in the first line, “Выхожу я в путь, открытый взорам”. Lermontov's “кремнистый путь” (“gravelly path”) corresponds to Blok's “каменный путь” (“stone path”). Bunin’s poem “Вьется путь” which also contains the motive of the path and the motive of the path in Blok's poems is combined with the theme of the motherland – “пьяная Русь” (“a drunken Rus” (perhaps an echo of Lermontov's “Motherland”): “Нет, иду я в путь никем не званный, // И земля да будет мне легка! // Буду слушать голос Руси пьяной, // Отдыхать под крышей кабака...” In the abovementioned Bunin's poem only the wind yearns for his homeland in the middle of the empty plains. Blok senses his sad native landscape very deeply,  “Над печалью нив твоих заплачу, // Твой простор навеки полюблю”. However, the poet does not dream to “забыться и заснуть” (“forget and go to sleep”); he dreams of disappearing in the vast expanses of his homeland, to become one with them, to melt down into them, “Приюти ты в далях необъятных! // Как и жить и плакать без тебя!” The last motive will be later used by Andrei Bely”.

In this passage, which we considered necessary to provide entirely, it is clearly visible that there are three components that make up, according to Taranovsky, the semantic halo of the metre:

Obvious shortcomings of the proposed model were pointed out by K. Vishnevsky in his article “Expressive Halo of Trochaic Pentametre”. He rightly stated that we can, on the one hand, find many examples of texts written in the same metre, but not containing this complex of motives and such syntax formula; on the other hand, it is possible to come across such motives and syntactic figures in poems written in a completely different metre [2]. After the publication of Vishnevsky’s article serious scientific debate took place concerning the question of imitative potential of the metre. However, this issue was practically removed from the scientists’ scope of interest and until very recently it has not been discussed at a serious level. Meanwhile, as shown by recent studies, including the ones already mentioned in Hvorostyanova's article, the problem of synaesthetic perception of poetic speech is not a scientific fantasy; the decisive role in its study belongs to the study of a poem's rhythm. Our further arguments are intended to serve as an illustration of the this idea.

Here is the text of the analyzed poem. 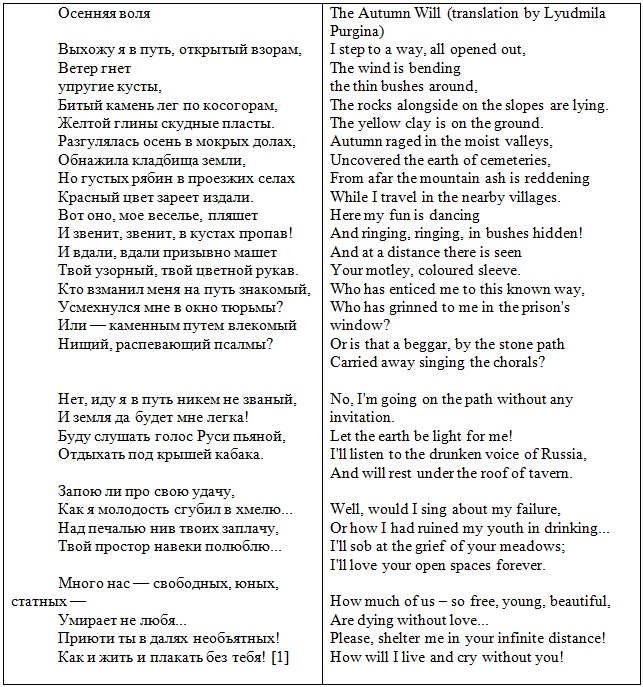 This text comprises a number of sustainable thematic units, characteristic of the Russian romanticism, which are combined by an important topic of the path. At the same time it is important to note that Blok enters into controversy with the romantic system of values, changing the characteristics of the narrator and artistic space in which he resides. It is especially visible when we compare two poems, the intertextual relationship between which was indicated by Taranovsky, “Выхожу один я на дорогу…” by M. Lermontov and “Накануне годовщины 4 августа 1864 года” by F.Tyutchev.

Another thing is worth our attention. Expansive usage of the names of everyday objects is opposed by Blok's distinct symbolization of the word “path.” It is repeated four times in the text, both Lermontov and Tyutchev avoid the usage of the noun “road” (which leads to the appearance of such combinations like “stone path” which are difficult for interpretation) and it marks a very special role imparted by this motive.

The idea of the path runs through “The Autumn Will” at all levels of the text, not only lexical-semantic.

The vocalic grid of the poem reflects the disintegration of the poem into several composite parts:

These parts form three overlapping flows, the grammatical signs of which are pronouns and verb forms. In the second, third and fourth stanzas we see verbs only in the form of a third person or in the form of the past tense. In the fourth and sixth stanzas there are mainly verbs in the form of the first person accompanied by a personal pronoun in singular and in the first person. The first stanza is of introductory nature and it combines all these features. In the final quatrain of the poem there is an unexpected fusion of “I”, “you” and “they” into ‘we”, that is, in fact, the mandatory contrast between “I” – “they” characteristic of a romantic text disappears.

The rhythmic stresses scheme also implicitly expresses the idea of the path. It is not simply a path – it is a path following which you feel no fatigue – you are relieved. It is not just because of the truncation of the second line of the last quatrain by one foot; based on the analysis of the principles of stresses arrangement we can trace a tendency to the general alleviation of stress from the beginning to the end of the poem. 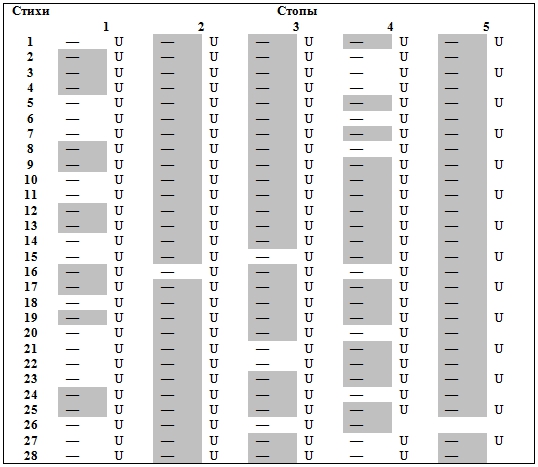 But, of course, the most important thing we are talking about here manifests itself on the level of word boundaries, in particular those three groups that form a kind of the barrier with the help of the pauses in the pronunciation of the text.

The symmetry and the dynamic nature of these barriers are noteworthy: 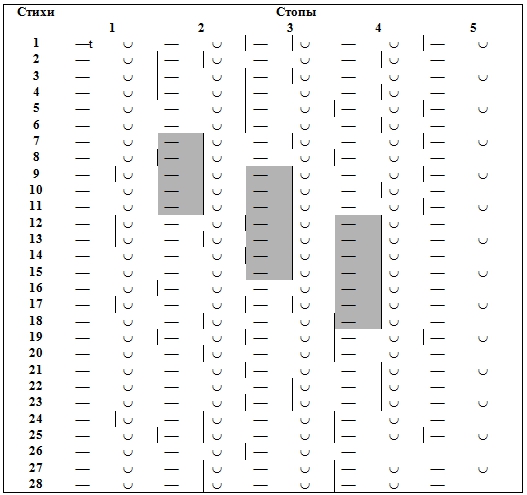 Thus, we can say that rhythm in “The Autumn Will” not only embodies the idea of the path as the consistent process of overcoming all emerging obstacles – it represents it as a moving boundary and, in a certain sense, it expresses it synaesthetically: while reading the text we gradually pass through horizontal (by rows) and vertical (in stanzas) word boundaries. Finally, we reach out to the two final open stanzas – with their predominance of open vowels, alleviated stress of strong position and a free position of word boundaries.

To sum up, let us return to the scheme of the semantic halo we began with. We have made some specific observations about the peculiarities of rhythmic organization of the poetic text and they cannot provide a basis allowing us to draw global conclusions. However, it is certainly a good occasion to formulate a hypothesis. Perhaps, the vulnerability of Taranovsky’s concept is due to the fact that he excluded the rhythm of texts under consideration, while the imitative potential of poetic speech can be most naturally implemented at this level. Then, from a variety of texts, characterized by common metre, the complex of motives and syntactic formulas, we will have to single out the text subcorpus where these coincidences would not be random, but rather conditioned by the rhythmic character of the poem. The problem of the research in this case should be reformulated: it is rather “rhythm and meaning” than “metre and meaning.”