The paper dwells upon the systematic description of English prefixes. Such features as origin, transporting opportunity, negation and valency are considered, as well as semantic features (such as polysemy and chains of synonyms). The theoretical significance is based on the importance of the word-building aspect in estimating typological characteristics of a language. Practical significance is explained by the importance of finding out features of foreign language morphemes in teaching word-building. The paper is based on quantitative studies.
Keywords:
prefix, word-building, english, quantitative analysis.

A prefix is generally defined as an affixal morpheme that follows the word-building stem. To characterize the prefixal inventory it is necessary first to estimate it. It can be classified into productive and non-productive.  P.M. Karaschuk characterizes  14 productive prefixes, pointing out also 57 less productive.

In this paper we consider functional and semantic features of prefixes of the modern English language. The theoretical significance is based on the importance of the word-building aspect in estimating typological characteristics of a language. Practical significance is explained by the importance of finding out features of a foreign language morphemes in teaching word-building.

To describe the elements of the prefixal system we will take the criteria described by  O.D. Meshkov (origin, transporting opportunity, negation, valency).

While speaking about prefixes it is important to mention an important role of borrowings. 6 out of 14 productive prefixes described by P.M. Karaschuk are borrowed (that makes up 42,5%). The main sources of borrowings are Latin (83,3% prefixes)  and Greek (16,7%).  Among the less productive prefixes the share of the borrowings is much higher coming up to 88,5% (50 prefixes out of 57). The comparative data are given in the chart:

However, V.I.Shkarupin comes up with another point  of view. He points out two groups of English transportive prefixes:

Still it is important to consider the fact that many (however, not all) of the above mentioned prefixes form words of a different part of speech in case of the simultaneous conversion. For example, it is possible to form an adjective  underwater by prefixation with  under- from the stem water. However, it will be the conversed stem of an adjective (as there is a word combination water transport in English).

This feature is typical for a huge share of prefixes (50% of the data). It makes up an important difference between prefixal and suffixal systems of the English language. A huge number of negative prefixes enhances the important role of prefixation as a way of changing lexical meaning.

Most productive English prefixes have single valency (64,2%). Single-valency prefixes in the English language are of two types: verbal and adjectival. It is evident, that many English nouns contain prefixes, but according to P.M. Karaschuk these are mostly derivatives from prefixal adjectives and verbs, so there is no act of adding a prefix to a noun stem in them. Out of single-valency productive prefixes  33% are adjectival , 67% - verbal. The chart below illustrates the data: 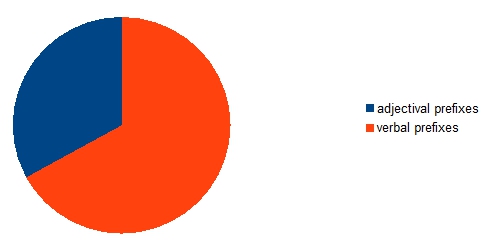 Further on we give the brief description of the basic English prefixes:

Further in the paper we consider the comparison of prefixes basing on the part of speech reference.

The data are to be presented in tables setting the presence of certain features. The following markers were chosen: native (NT), transporting (Т), negative (NG), single-valency (S). The presence of a feature is marked in the tables as 1, the absence as  0.

The analysis data are presented in the table 1. 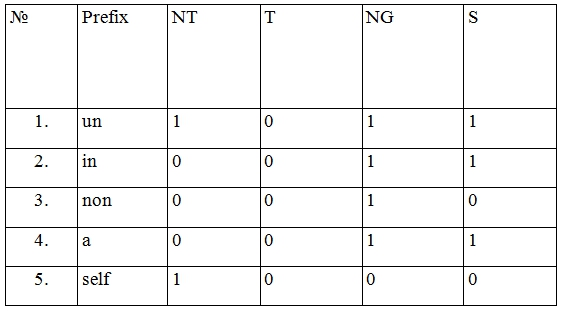 The data above cause the following conclusions:

The comparative data are presented in the table 2. 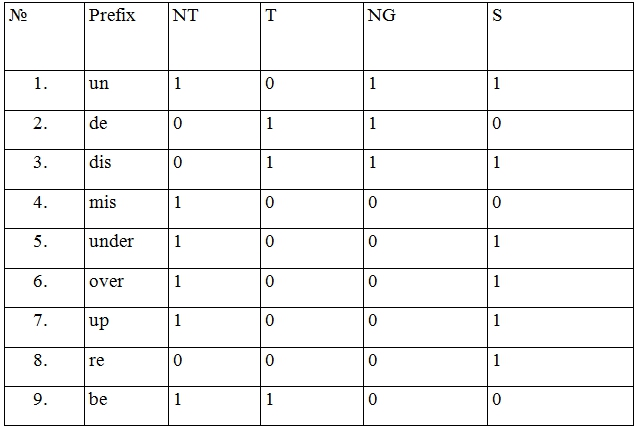 The given data give way to the following conclusions:

Further on the paper considers the comparison of adjectival and verbal prefixes. Under consideration is the total of productive affixes and the share of characteristics: native (NT), transporting (Т), negative (NG), single-valency (S).

Speaking of semantics of prefixes it is important to mention that prefixes are more independent than suffixes. It can be explained by the fact that a lot of prefixes have originated from independent part of speech (such as prepositions).

Further in the paper, basing upon the data above and practical material obtained while analyzing lexicographical data, we give the description of semantic peculiarities of verbal and adjectival prefixes. .

Semantic comparison of adjectival prefixes is given further in a table 4. 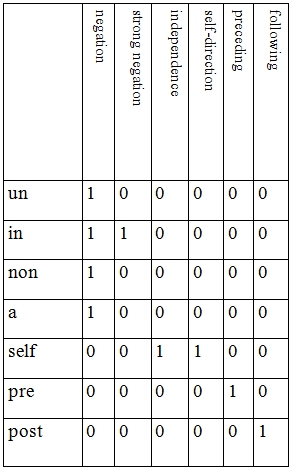 As the table shows polysemy is typical of two prefixes (in-, self-, with 2 meanings in both cases).

The only meaning possessed by more than 1 prefix is negation. It is typical of  such prefixes as un-, non-, a- ant with a stronger shade — of  in-. The above mentioned prefixes form a chain of synonyms, where the native prefix  un- predominates.  Other borrowed prefixes are strictly limited by collocations.

Verbal prefixes are also considered further as a table 5. 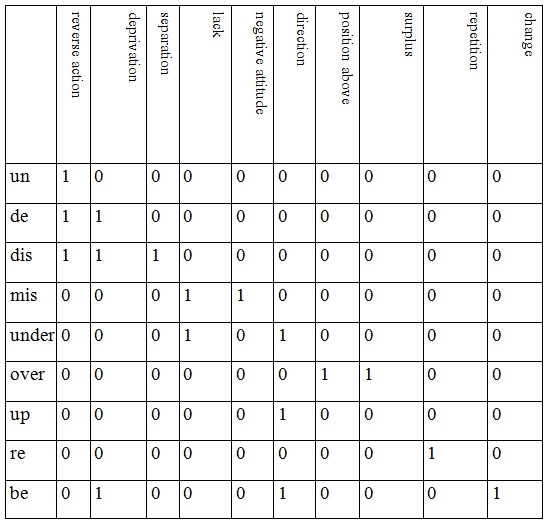 As the table above shows,  3 prefixes form a chain of synonyms «reverse action» (prefixes un-, de-, dis), with the dominating native prefix un-. 3 prefixes also have  the meanings of deprivation and direction, but they don't form chains of synonyms (in the first case due to other meanings of prefixes, in the second case due to different direction of action).

In general while describing the semantics of English prefixes the following conclusions can be made:

2) the most common meanings are negation, reverse action, deprivation and direction.

As the research above shows, prefixes of the modern English language constitute a very particular sub-system of morphemes and should be further researched integrally with other elements.